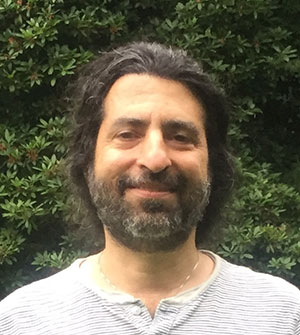 Hi, I'm Chris Morda, a Seattle, Wa based musician and music instructor. I have been a music lover all of my life, one of my earliest memories is listening to "Under My Thumb" with my sister over and over from my parents "Hot Rocks" album (an early "greatest hits" collection).  Ironically the majority of my elementary school years were listening to Beatles albums.  I was always fascinated by the influence the Beatles had on Society at large (as well as other bands, especially the movement of the late 60's).

I started playing guitar in the mid 1980's as a teenager in the suburbs of Detroit, Mi and have spent the past 35+ years exploring the the world of guitar sound.  My journey has led me down many different paths, I initially took lessons for a year-and-a-half and then was a "bedroom" musician throughout high school.  After realizing I wasn't really progressing very much and really wanted to get better I studied for another 4 years with Robert Noll, a veteran of the Detroit (and National) blues scene.  Robert answered all the questions that had grown over the years (and then some) and I discontinued my studies when I moved to Seattle the early 90's.

At this time I began "self-explorations" and began regularly meditating and listening to Indian and World music.  I became very interested in the cultural role of music in the world's cultures and after completing my associate of arts degree at a local community college formally studied Ethnomusicology at the University of Washington.  For my senior thesis I wrote a research paper on the development of slide guitar traditions and graduated from UW in 1998.

I then began playing in local blues bands in the Seattle area and began studying the "healing" properties of sound and music as a side interest.  It was around this time that I began formally teaching guitar lessons at a music school for at-risk youth and I taught private and group lessons for the next 10 years. A week long training in Sound Healing with Tom Kenyon around this time was very mind opening and exposed me to a side of music and sound that I was completely fascinated by.

My next big development in my studies was a growing interest in "microtonal" music and Just Intonation.  I ordered a guitar from Jon Catler's freenote site and began studying the theory of musical temperaments and harmonic series based tunings.  I spent a couple of years learning how to playing the freenote "ultra-plus" guitar (I even wrote a book about it!) and also started playing fretless and lap slide guitar.

My pursuits next found me in New York city for a few years and I had the good fortune to study music and sound therapy through the Open Center and The New School.  The program at the Open Center was a year long program that met one weekend a month with one a different "sound healer" and focused on the world on vibrational healing through sound. The 2 year program at the New School focused on Music Therapy from a more traditional "Western" medicine approach and culminated with an internship at an AIDS clinic Harlem where I worked under and alongside a music therapist for 10 hours a week for 4 months or so. While in New York I also volunteered for 2 years working a few days a month at La Monte Young's Dream House.

After moving back to Seattle I began teaching again part-time at a music school for a few years.  I then took a break from playing or teaching for 5 years or so while not really feeling the inspiration to play.

The long break was interesting but has now subsided as I find myself looking for a way to integrate all previous musical pursuits in a single cohesive direction and share my journey with new students, friends, and audiences.