In this introduction to Western Music Theory we will cover the following topics: 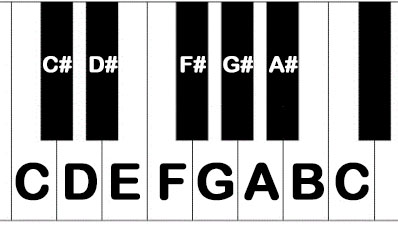 The use of an enharmonic note is determined by the Key Signature (the parent key that the note belongs to). We will review this in further detail later but for now it's important to understand why common musical language uses a sharp or flat. Below is the circle of 5ths(thanks wikiepedia)and a table of "Keys" and the notes in that key. 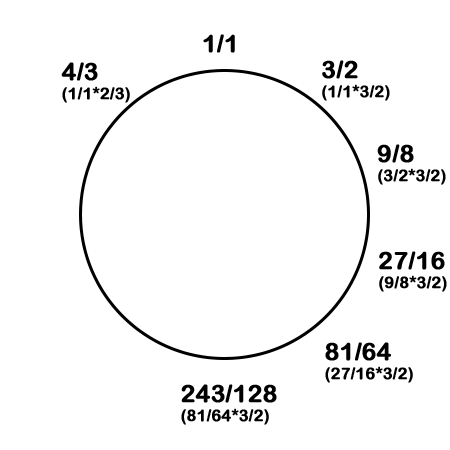 Notes that are positioned next to each other are referred to as half steps.  Half steps naturally  occur between the B and the C and E and F notes, whereas all other notes have a note (sharp or flat) in between them.  Look at the keyboard below for a visual clue how this works.

Whole steps occur when there is one note between two keys, for example in the keyboard above there are whole steps between C and D,  C# and D#, D and E, etc.

Let's now look at one of the fundamental building blocks of Western Music Theory, the Major Scale. This is a diatonic (7 note) scale that begins again on its’ eighth note one octave higher. When learning basic scale theory we usually use the Key Of C as there are naturally no sharps or flats in its’ major scale. The chart below shows the Major Scale in the Key of C and includes the Note Name, Scale Step, Interval, Western Solfeggio syllables used in Sight Singing as well as the East-Indian Swara syllables. A further explanation of intervals follows the scale charts.

One way scales are usually taught for memorization is to look at where the "half-steps" occur.  If we look at the above piano we will observe that there are no notes (black keys) in between the b & c, and e & f keys.  This is the same for all major scales, so if we think of the scale in terms of the numbered intervals, whole steps occur between the 1st & 2nd, 2nd & 3rd, 4th & 5th, 5th & 6th & 6th & 7th scale degrees.  Half-steps occur between the 3rd & 4th and 7th and 8th scale degrees.

The minor scale is another diatonic scale that is the other predominant scale in Western Music as well as theory.  The A minor scale shares the same notes as the C Major scale so we’ll use that as the root.

Looking at this scale we see there are half steps between the 2nd and 3rd and 5th and 6th notes of the scale.