A drone is a continual chord or note sounded over the course of a musical passage or full piece of music.  The use of drone can add an "base" for musical intervals to be explored.  Drones's are widely used in North & South Indian music and have been widely used in avante-garde composer LaMonte Young's music and sound installations.  In Youngs's and his Partner Marian Zaeela's "Selected Writhings"(pages 7-8)  he discusses the use of drone in relation to musical intervals:

Tuning is a function of time. Since tuning an interval establishes the relationship of two frequencies in time, the degree of precision is propor- tional to the duration of the analysis, i.e. to the duration of tuning. Therefore, it is necessary to sustain the frequencies for longer periods if higher standards of precision are to be achieved. The fact that this infor- mation is not generally known to musicians may be one reason that only a few examples of pitches of long duration such as organum, pedal point, and the drone are to be found in music. On the other hand, astronomers have known for some time that if a measurement or comparison is to be made of two orbits which involve many years of time, the degree of preci- sion of the measurement will be proportional to the duration for which the measurement is made.*

In the tradition of modal music a fixed tonic is continued as a drone or frequently repeated, and a limited set of frequencies with intervallic rela- tionships established in reference to the tonic is repeated in various melodic permutations throughout a performance in a particular mode. Generally, a specific mood or psychological state is attributed to each of the modes. The place theory of pitch identification postulates that each time the same fre- quency is repeated it is received at the same fixed place on the basilar mem- brane and transmitted to the same fixed point in the cerebral cortex pre- sumably by the same fiber or neuron of the auditory nerve. The volley the- ory of pitch perception assumes that a sequence of electrical impulses is sent traveling along specific neurons of the auditory nerve.

View video of the Dream House in New York city.

Brainwaves are rhythmic or repetitive patterns of neural activity in the central nervous system, or put another way how our neurons communicate with our brains. Brainwaves are measured by a device called an Electroencephalography (EEG). An EEG works in conjunction with small electrodes and wires that are placed on the scalp that detect the brainwave activity by amplifying the signals and recording them on an attached device such as graph paper or a computer screen.

EEG machines measure brain activity in a measurement called a Hertz(Hz).  Hertz is a term we also use when measuring musical frequencies and is synonymous with the term "cycles per second" that is also commonly used to label sound frequencies, 1hz or 1cps.  Waves have are measured by looking at the highest point, it's peak, and it's lowest point, the trough and measuring from one peak to the next.  See the image below. 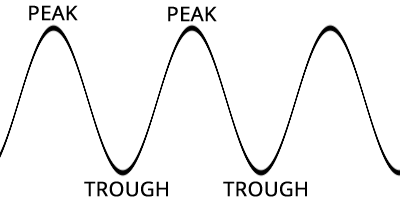 It has been discovered in research on brainwaves that these waves change dependent on what we are doing and feeling. Below is brainwave categories and the activities associated with them as noted by sound healer and brain state researcher Tom Kenyon from his website:

Entrainment is when two different motion or signal frequencies become in sync with each other.  This process was first discovered in the late 1600's when Christain Huygens noticed that the pendulum frequencies of two clocks mounted on the same wall or board became synchronized to each other. One of the main ways our bodies entrains to music is through rhythm, listening to a long piece of music that is very slow rhythmically will begin to slow down the heart rate.  Of course listening to uptempo music would have the opposite effect and speed up our heart rate.

Brainwave entrainment is when we use frequencies to entrain our "brain states".  This is done by introducing two different frequencies, one in the left ear and one in the right ear(the difference between these two pitches can't be more than 30hz and the pitches must be low than 1000hz). These two pitches then create an auditory illusion called a binaural beat that is heard as a perceived beat that is the differnce of the two frequences.  For example if we had a frequency of 450hz in one headphone and 440hz in another the binaural beat genterate woud be 10hz. After listening to these two tones for a duraton of time are brainwave then entrains into one of the 5 brain states based on the frequency that it is entraining to.  With our example you would move into alpha state since it's 10hz value falls beetween its' defined ranges of 8-12 hz.